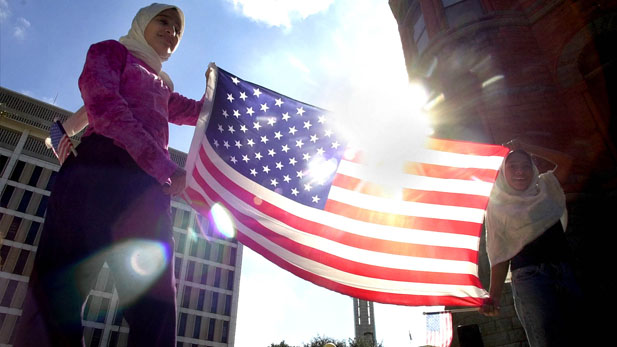 Sadly, there is history in linking Islam with radical Islamist movements, as I witnessed first-hand in the U.S. Government. I can remember when I started my career in The Counter-Terrorism Center as a young Muslim American—I was a 25-year old girl—and the “us or them” mindset permeated analysis, operations overseas, and targeting. Those years, before and after 9/11, helped me acknowledge what I did not want to know to be true. That the true villain is the ignorance (and for some, an abhorrence) of a faith I was born into.

Over time, details of Islam and Arab culture more generally began to challenge the day-to-day-reporting and writing of intelligence assessments for the U.S. President and his senior aides and other policymakers. A chorus of intelligent analysts and case officers surfaced after many spent time in the Islamic world or read about Islam with an objective mind and an open heart.

One woman with fair skin and sandy-brown hair in her mid-forties converted to Islam after reading the Quran at work and in a show of faith, she decided to don a bright-blue headscarf and looked for an empty conference room to offer her prayers. One tall, lanky man with glasses and thinning hair came back a Muslim after a visit to Saudi Arabia, where security officers who acted as his escorts and foreign liaison partner, gave him a tour of the holy mosques in Mecca and Medina. Another Muslim convert with dark-skin and broad shoulders who had familial ties to Ghana knew he had to honor the spirit of Juma, Friday, by giving a short sermon and leading a small group of Muslims to kneel in prayer. Surprised by his religiosity and blessed to have him as a friend, I still reminded him: “This is The Counter Terrorism Center.”

In those early days of my career, I also joined a newly created organization, aptly called “The Islamic Working Group,” to try to prevent monochromatic moral thinking. Often, a short question—what’s Islam got to do with it—allowed for a wider debate on the diversity and divide within Islam as well as what it might mean to subscribe to an Islamic or Islamist group, or for those still ignorant, the grave consequences of being Islamophobic. Today, I suspect that many Muslims, in and outside the government, are still trying to clarify these terms and concepts.

When I quit the Center, I left behind a group of Muslim Americans, dedicated, determined and perhaps destined to serve. I know I felt that way and hoped the office I worked for would find a way to recognize their struggles and sacrifices. Today, there are countless numbers of Muslim men and women, including converts, protecting the United States as they continue to uphold Islam—they remain loyal and loving to both country and creed, even as they could be targeted and treated as the enemy.

Farhana Qazi is a scholar and speaker on conflicts in the Islamic world. For her service to the U.S. government, she received the 21st Century Leader Award by the National Committee on American Foreign Policy (NCAFP) and the Humanitarian Award from her alma mater in Texas. She provides updates at www.farhanaqazi.com


Note: Al-Rasub is not responsible for writer personal opinion.