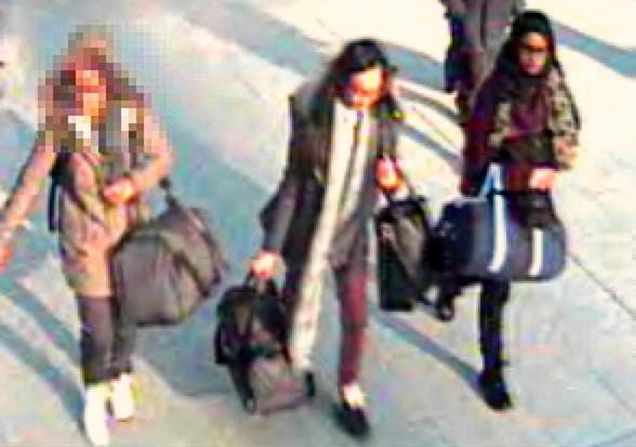 A number of Muslim girls in the West have left for Syria to seek a glorified past and reserve their place in Jannah, or paradise. The strong appeal and charm of an Afterlife, which even moderate and mainstream Muslims hope to enter after death, is one compelling argument that likely explains why Western-born Muslim girls desire and accept martyrdom.

Dressed in a niqab, one Muslim woman brandishing a Kalashnikov declared: “I know what I’m doing. Paradise has a price and I hope this will be the price of Paradise.” Under the cover of Umm Layth, Scottish-born Aqsa Mahmood often tweets and blogs about the other world. Last fall, she posted: “My sisters. We made hijrah [migration] together. May Allah grant us shahada [martyrdom] & unite us in Jannah.” Another English-speaking ISIS woman, under the guise of Al-Brittaniyah, posted: “May Allah grant all the wives of the Mujahideen Sabr [patience] and re-unite them in the Highest Jannah with their Husbands.” Despite their absolution, these girls are ill prepared for the death of their husband. In another post, Umm Layth writes: “Allahu Akbar, there’s no way to describe the feeling of sitting with the Akhawat [sisters] waiting on news of whose Husband has attained Shahadah.”

With an estimated 30,000 ISIS fighters, women account for 10 percent of foreign recruits from Western countries, including a small number from America, Australia, Belgium, Britain, Canada, Germany, Scotland, and France, which heralds the highest number of female recruits.

What explains the girls’ motivation to leave a life and family in the West for an unknown and uncertain future on the ISIS battleground? While first-hand information, including interviews of ISIS women, is not always possible, we can only conjecture why these girls join the terror group. I use a simple model to describe common factors, known as “3 Possible Drivers” or simply, “3Ps”:

Prestige. Women are as capable as men. It is likely that girls and women go to ISIS to assert a twisted kind of Islamic feminism. To prove that a woman’s “rightful” place in Islam is to be the mother and wife of a Muslim man—an act of piety that the girls believe will grant them tremendous respect and reverence from the ISIS fighter they marry. By donning a niqab, female recruits may feel they exemplify the Muslim prototype of modesty and purity. Radical Muslim women joining ISIS may also think they have restored glory, respect, and honor—these are powerful virtues in Muslim culture that many women, even moderates, uphold.

Power. While there is no proof, yet, that empowerment is a motivator for female recruits; it can be inspiriting and uplifting for women to feel they can participate in a greater cause or campaign, to include “Save Syria” from tyrannical rule. Some women may feel empowered when they belong to a “sisterhood” network that creates unity and gives them purpose, even if that is aligned with death. Using the narrative of martyrdom, female recruits believe God will grant them the rewards of an Afterlife—an empowering emotive. And the modern mujahida is sometimes also dangerously naïve. Upon arriving in Syria, many of these girls find a life burdened by war with an unpredictable and uncertain future. Further, when in Syria, these girls will lose the power to choose to stay or leave.

Passion. The emotional appeal of war, or what some experts call adventure, compels some girls to believe they can be Mulan, the Disney character who joined the Chinese Army to honor her family—the cartoon inspires young girls worldwide, even radical Muslim ones. But there is another kind of passion that is heart-felt and the reason many girls have risked travel to Syria to find love (or lust), all in the name of Islam. To encourage other women to seek an ISIS husband, Umm Layth posted online: “Marry the person you know can uplift you morally and who will always remind you that Allah is sufficient for you in times of trials.” Marriage to an ISIS fighter offers women a new Islamic identity—they are proud to be their wives—and their bond with other women in the compound fosters an Islamic society and system that many may find lacking in the West.

Other possible motivations, including personal grievances, also likely contribute to radicalization. That grievance will vary for each girl, even when they share similar gripes and short-to-long-term goals for joining ISIS.

Despite the international community’s growing concern, I believe that these radical women are a riding wave of ISIS’s success—the same was true for the women of al-Qaeda, who were invited into the organization to fulfill a specific role. As the so-called bliss of marriage and martyrdom, which exist as imaginary ideals, begin to fade, more young Muslim girls will reject the terror organization.

Farhana Qazi is a scholar and speaker on conflicts in the Islamic world. For her service to the U.S. government, she received the 21st Century Leader Award by the National Committee on American Foreign Policy (NCAFP) and the Humanitarian Award from her alma mater in Texas. She provides updates at www.farhanaqazi.com

One Response to “Three Possible Reasons Why Girls Join ISIS”