Israel greater threat to ME than US 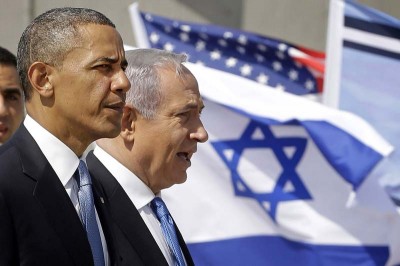 I had an interview with Press TV recently on the issue of whether Israel should be considered an exception in signing and ratifying the Chemical Weapons Convention agreement.  There are 190 States that have fully signed and ratified this treaty. There are 7 who have not. They include Angola, Myanmar, Israel, North Korea, South Sudan, and Syria.

that’s a curious mix. It’s interesting that we have just now gotten around to Syria or even addressing the issue, but not surprising to those who know our use of chemical weapons in Vietnam, or Israel’s use of white phosphorus in Gaza. or that we provided Saddam Hussein with chemical weapons to kill the Kurds.

But more to the point Israel is a rogue tribe that has planted itself illegally on Palestinian territory through theft, murder and genocide with no declared boundaries or even a constitution  It has no legal basis for even being in the UN let alone being asked to sign and ratify the CWC. Since it is not a legal state, yes, it is an exception just as any other organizations such as the NAACP would be an exception. Israel is a formal organization in the same sense that the Mafia is, but that’s all you can call it. It is not a state. it has no legal borders or any official document such as a constitution which defines laws which would protect citizens in general and established standards  that would give it credibility as an official state, and. no nation in the world to my knowledge recognizes the geographic space it occupies as legitimate territory.

It was probably Israel that set the precedent for squatters rights in this country.  All they had to do was turn on the water and the gas and electricity and it was theirs, baby.  It was abandoned property, right? Propaganda from Israelis has it that no one was living there anyway. That’s the squatters argument.

The US and Russia ought to be at its door with boots and drones demanding compliance with the CWC. Israel is a far greater threat to the region than even the US. The demand that Israel join the international community legitimately ought to be job number 1,  Israel cannot do this unless it respects the human rights of the Palestinians, negotiates sincerely, withdraws to a boundary that’s the Palestinians will agree to, since it is their land to begin with, abandon its illegal settlements,  acknowledge its nuclear stockpile, acknowledges its chemical weapons stockpile, and tries seriously to be respectable citizens of the world instead of the world’s worst criminals. while on going peace talks with the Palestinian Authority have been engaged, it is still building settlements incomplete violation of the terms established for the peace talks. such disrespect for the process characterizes the nature of their intent.

The pressure on Syria about chemical weapons is absurd anyway. Not the US or anyone else has produced any evidence whatsoever that Syria was responsible for this attack. It seems to me that a civilized country would at least present some evidence before asking its citizens to go to war.  We have just another scenario like the lie about weapons of mass destruction in Iraq. It was all b******* in order to mask another agenda. Obama redlined this chemical issue a long time ago. He made it very clear that the use of chemical weapons by Syria would be a justifiable provocation for an attack. There’s no doubt in my mind that someone like Assad who understands clearly the US  agenda by its support of the rebel forces would take that seriously.  So why would he commit suicide?

The bottom line anyway is that Israel is an exception in some formal sense because it doesn’t deserve international status of a real counttoy. but it certainly should be brought to kneel before the International court of public opinion. Israel is certainly in the footlights right now limping off stage after losing the major support of the US its aggressive stance with both Iran and Syria. Given what we’ve seen in the past, we should be analyzing very carefully any event around the world that would disrupt the diplomatic process with both of these countries. Israel is a terrorist state. it is not to be trusted in the slightest.

Paul Barrow is US  based writer, activist and  founder of a policy group www.unitedprogressives.org.
Readers can  reach him at: