HOW CAN YOUTH HELP TO END CORRUPTION 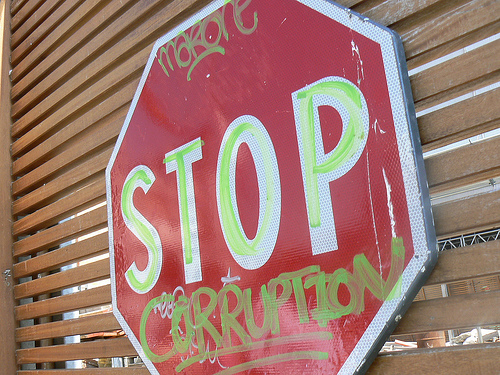 In Benazirabad-a district of Sindh, stands a small Girls Primary school. The school is not inhibited by pupil-the little girls clad in uniforms. Instead, weeds and bushes have grown here and there. Cow webs have concealed the  black boards as the school gate remains sealed with a rusty lock. The villagers have never heard the School bell ring however, according to the government files, this school is currently educating the village girls and the ghost Head mistress and teacher is also being paid. Reality is that the door to education for girls of that village remains close, locked and sealed!

Sadly, it is not the only school in Pakistan that is a victim of corruption. Dig into the matter and you will find many more. Believe it or not, in Sindh alone, the number of Ghost schools exceeds twenty one hundred. Corruption has not only denied free education for thousands of under privileged children but in fact the whole country suffers from corrupt behavior of some irresponsible Governmental and Private institutions and their ruthless officials.

We often find ourselves wondering, “How do people get away with such dishonesty and corruption?” The answer is quite simple, it’s because WE allow them to do so! Nobody cares to report, nobody is brave enough to question them, to fight for their right and those few who muster enough courage, eventually give up due to lack of support, guidance and demotivating statements from their elders like “Yahanka to system he kharab hay, tum akailaykiaker lo gay?”

But what we often forget is that it is “Us” who constitute the system, after all we are the ones who elect our rulers.As a patriotic Pakistani we must teach our youth to:

Say “No” to bribe:There is a dire need to change our thinking, to “Be the change we want to see.”Instead of becoming part of unfair practices, let’s say “No” to bribery.

Whistle blowing:Young people are more receptive to change rather than senior people however they lie in the lower level of an organization’s power hierarchy. Whistle blowing is a very effective tool to notify the top management of such unfair activities. So, if you notice corruption in the very organization that has just hired you, act bravely and refuse to become part of the system because it is people who constitute a system.

Speak out: Whether it is the unavailability of medicine in a government hospital, absence of a qualified doctor, rigging in elections or any other manifestation of corruption, refuse to stay quiet.Do your part, Just speak out!

Report and expose:Next time you get fined by a traffic sergeant, pay the fine instead of bribe. If the sergeant insists, report him,even better, make use of the latest gadgets you carry in your pockets. If higher authorities refuse to take notice of the corrupt behavior, you can share an audio or video recording on social media like facebook etc. Even TV channels these days are looking for such news and videos. TV Programs with similar content of exposing injustice and corruption can be contacted to force the top management of that institution to take action against this corrosive problem. You never know when that little step of yours turns into a movement and the problem is actually dealt with, making YOU a public hero overnight and encouraging many others to do the same.

I know it’s not too easy as corruption is deep rooted in our country but I ask you to be optimistic. Only if you believe in yourself, Pakistan’s Youth can have a very profound impact on eradication of this social evil from the society provided they are guided, inspired, facilitated and rewarded for pointing and coming up with substantial proof regarding corruption. Let us join hands and be brave enough to stand for what’s right, to stand for our right, for a stronger Pakistan, for a brighter tomorrow.

5 Responses to “HOW CAN YOUTH HELP TO END CORRUPTION”