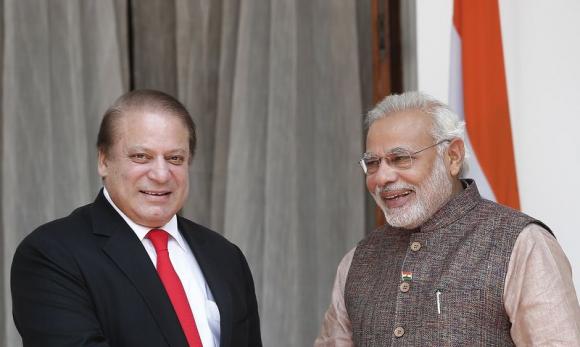 Iqbal Ismail’s insight:
Modi’s government has been installed in power. It is time to consider the implications. We are interested in what this change will mean to Pakistan.

Let me cast this issue in a different light. When Pakistan was created 1947, the date was 27th of Ramadan. A blessed day where God’s message was, I have created this country in my name and hereinafter, I will protect it. So we observe that inspite of what happened in Bangladesh and what India did under Indira Gandhi to destroy Pakistan and what Zulfikar Ali Bhutto (ZAB) did in inciting wars against India. Pakistan still lives. What our politicians and our Army and our corruption have not succeeded to destroy Pakistan. Pakistan still exists.

Yesterday was the night of Shab-e-Miraj, the Night in which the Prophet (P.B.U.H) ascended to Heaven on his burak to meet the Lord of the Worlds. This was also the night when Modi was being installed in power. What could be the Lord of the Worlds message except that I promise to protect Pakistan against destruction in war now I will protect it in peace let the two-countries bury the bitterness of the past and live in peace.

The history of mankind is full of instances where yesterday’s terrorist is today’s peace-maker. Nelson Mandela for example was considered to be a terrorist and was jailed for many years yet he appeared afterwards as the symbol and architect of South-Africa’s freedom. George Washington was deemed to be a terrorist and today is hailed as the Father of the Nation.

We can consider many examples from history where terrorists became peace-makers and were given the title of Father of the Nation. So I forecast will be the case with Narendra Modi. He will be known not as a terrorist but as the founder and father of modern India.

Nothing is impossible for the Lord of the Worlds. All He has to say is, Be and it is. It is the command that is obeyed every time. Be and it is. This is the Lord’s will and so it will be. As for Nawaz Sharif he could not have asked for anything better. Now his privatization initiatives will all be crowned with success. India will buy everything. The Indians want to own Pakistani assets and they will get what they desire. I would recommend that Pakistan sets up an office of the privatization commission in New Delhi. No road-shows are necessary. The Indians know Pakistan better than we do.

Peace will also mean that the India whose role in the Asian century was inhibited due to the necessity to maintain a large Army and weapons against the threat from Pakistan will now be freed from this necessity of an arms race. Both nations will benefit. There will be a huge peace dividend.

On this optimistic note, I end this discussion. Let peace prevail.