Tale of A City 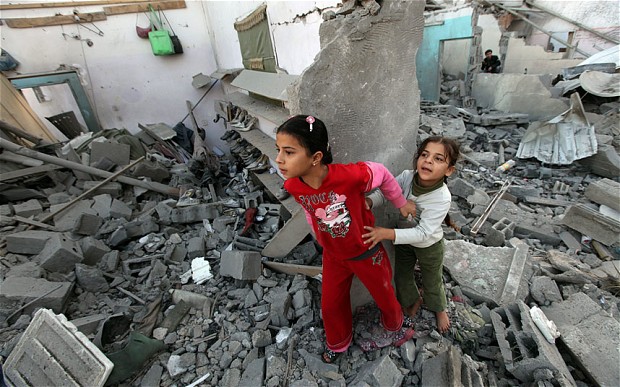 I am sure you must be well aware of the city I am going to talk about here. Yes! The great city of Palestine, Gaza! Why I called it “great”? It is not as big as New York or as lively as Paris; it does not have the charms of Rome, neither does it have nights like that of Vegas. But still, I call it great. A city where the bombs fall one after another, a city which has been turned to ruins in few days, a city where thousands have been ruthlessly murdered, what should I call a city of such great sacrifices that the blood of its inhabitants has been buried in its own ruins. Sometimes I feel like Gaza is weeping, crying silently on its own destruction. I can hear its silent screams. What on earth makes people massacre people so blindly and cruelly?

Gaza is going through this pain of being torn all by itself. It is said that the Second World War caused great destruction to the cities of Hiroshima and Naga Saki. People protested against that war at that time and cried for peace. Campaigns were run throughout the world to stop the brutality. Why have the flag holders of peace shut their eyes on this extreme cruelty of today?

The global community shows much interest in bringing peace to the world and fighting against the terrorism. Why the leaders who claim to finish terrorists and promise to bring real peace are silent on this act of terrorism?

The United Nations was organized to settle matters with table talks but it has failed completely to do what it was supposed to fulfill. It can give nothing more than mere words to the people and negotiate nothing but condemn only through  words. The words of the global community cannot heal the deep cuts on Gaza. The worst thing of all, Muslims are silent. If they try to imitate the battle of Badar, and help their brothers and sisters, Allah Almighty will definitely send His blessings from  Heaven. All we need to do is to have some courage and do whatever we peacefully can.